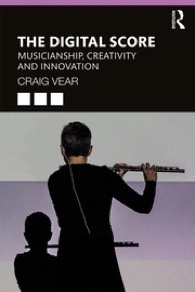 Can we still think of music in terms of scores? How can we counter the argument that notation is a Eurocentric, antiquated notion rendered obsolete by jazz in the 1950s and 60s? George Lewis provides some form of a response to these questions through his practice of improvisation and notated composition, as well as through his theoretical reflections (c.f. The Oxford Handbook of Critical Improvisation Studies). Sandeep Bhagwati, similarly, through his exploration of the concept of comprovisation1 , reveals multiple links between the written work and the experience shared between performer and audience.

If we observe the practices of contemporary composers, notation remains, for some, a cornerstone which is not subject to scrutiny. Questioning the value of inherited conventions established in the 19th Century (for the most part) is considered by many to be a risk that may endanger prospects of performance. For others, in contrast, re-imagining the apparatus of notation is at the core of a fertile field of experimentation. Through the prism of the latter ideology, Craig Vear examines the term score, looking in particular at the impact of new technologies on notation, and the possibilities to which they give rise. IIn a world surrounded by digital media and audio recordings, the process of symbolization inherent to the score still fulfills musicians’ desires to communicate ideas without the need for them to be present. From his/her abstract musical idea, to its inscription on a page, to the moving fingers or lips of the performer, to, finally, the ears of the listener, the magic still operates today, in a manner reminiscent of the ars nova, from some 700 years ago. If Craig Vear and the international TENOR (Technology for musical Notation & Representation) community agree on some references (e.g. Ryan Ross Smith: http://ryanrosssmith.com/animatednotation.html), The Digital Score seems to open up new areas of research, emancipating itself, for instance, from issues of computer-assisted composition associated with IRCAM composers of the last 50 years, to the benefit of a broad and interdisciplinary vision which is open to multimedia, artificial intelligence, as well as the recent developments in software.

After an examination of the nature of the digital score (Chapter 2, the digital score as a communication interface, as a map for musicians…), Chapter 3 proposes “Seven Modalities of the Digital Score” (Interface object, Material affect, Goal, Content, Language, Feedback, Flow) which help frame their potential. Chapter 4 then explores their “Defining Features” (Augmented page, technological conductor, collaborating score, Animated score, system as score…), providing a classification2 of an unprecedented scale and depth, consistently illustrated with concrete examples.

Digital technology is transforming the musical score as a broad array of innovative score systems have become available to musicians. From the mediation of printed page, to animated and graphical scores, to artificial intelligence-based options, digital scoring affects the musical process by opening up new possibilities for dynamic interaction between the performer and the music, changing how we understand the boundaries between composition, score, improvisation and performance. The Digital Score: Musicianship, Creativity and Innovation offers a guide into this new landscape, reflecting on what these changes mean for music-making from both theoretical and applied perspectives.

raig Vear is Professor of Digital Performance and Music at De Montfort University, UK, where he was recently awarded a European Research Council project3. Drawing on findings from over a decade’s worth of practice-based experimentation in the field, the author builds a framework for understanding how digital scores create meaning. This book provides a solid foundation for any student/artist/teacher wishing to explore the relationship between notation and technology.