“It’s a piece full of contrasts” says the 30-year-old from England who currently lives and works as a composer in Stuttgart, Germany. Mond(schatten) [Moon(shadow)] commissioned for flute and bass flute, composed in September 2017, was premiered on September 9, 2018 as part of the concert series “Orgel plus” in Kornwestheim near Stuttgart. 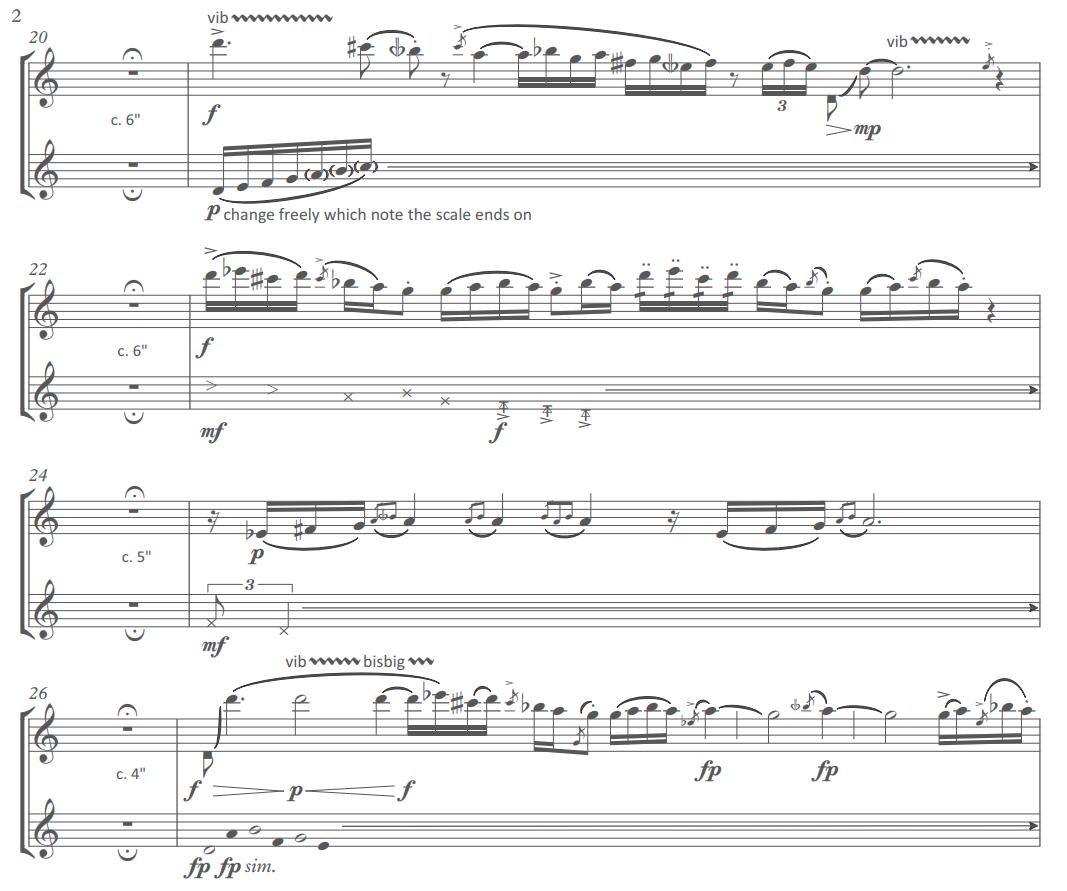 She plays the trombone and conducts several wind ensembles in the Stuttgart region, for which she writes new compositions in a variety of styles. She consequently has a natural affinity for wind instruments, and this isn’t her first piece written for flute. Whilst studying for her master’s degree at the music conservatory in Stuttgart with Caspar Johannes Walter she wrote Zwei Kreise [two circles] for solo flute and to a crow for flute and tape. In her own words, Sophie Pope says this piece is dedicated to these highly intelligent birds (crows), which don’t necessarily impress through their beautiful song, often look quite bedraggled and don’t embody a traditional style of beauty. The composer thinks there are already plenty of pieces about pretty birds with pretty songs. For this reason, she has dedicated the piece, which uses many extended techniques, to this more unconventional bird. The sequel II a crow for solo violin won a call from the British record label RMN. She is one of the founding members of the Stuttgarter Kollektiv für Aktuelle Musik (S-K-A-M).

In 2013 Sophie Pope studied for a semester in the USA and met the shakuhachi grand master James Nyoraku Schlefer who is the only non-Japanese person to hold this highest of titles for players of this instrument. The shakuhachi is a traditional Japanese bamboo flute. This longitudinal flute is open at both ends, has finger holes and a sharp edge at the top to blow across. Master players like James Nyoraku Schlefer show the great range of subtle colours and sounds that can be produced on such an instrument through varying the embouchure, dynamic and intonation. Sophie Pope enjoys writing for unusual combinations of instruments and composed Bailey Island for cello and shakuhachi which has since been played in Stuttgart and New York.

This resonates in the flute writing for Mond(schatten) which requires a lot of differentiation in sound production (see the example page 2 of the score) and is quite difficult to notate using classical notation. The “bisbigliando” on the d6 in bar 27 is played by fingering the note with the left hand and lightly and quickly adding fingers of the right hand. This vibrato-like effect is comparable to “flattement” on baroque transverse flutes. For the small microtonal adjustments, as in bar 29, partial covering of the finger holes is a good method. This is only possible with an open holed flute. The harmonic a6 can be achieved by overblowing the d5.

These delicate melodic patterns are contrasted by the simpler effects in the bass flute. Variations on a type of dorian scale on d sound ranging from a “normal” legato in bar 21 to a succession of “lip pizzicati”, produced by the consonant “p” with no air sound, to key clicks and percussive sounds such as “tongue pizzicato”, similar to the “lip pizzicato” but with the consonant “t”. Bell sounds as kinds accentuated notes which decay rapidly, as in bar 27, enhance the expression of the lower flute. Whilst the smaller flute is bound to the tempo of 72 beats a minute, the bass flute is not metrically strict. The repeating effects are important. The top part determines when each action ends.

Whilst the composition on this page is in many ways contrapuntal, there are exact parallel progressions later in the piece, including simultaneous sound effects on interval trills of different pitches and amplitudes. These small sections are part of a larger form in three sections which focus on the different moon phases in the moon cycle. In the first part, the rests last for an exact duration in seconds which gradually decrease and eventually disappear. They represent the gradual recession of the dark part of the moon, via the half moon to the full moon. It becomes apparent how important it is to actively and expressively perform rests. It is incredible how long a rest of 8 seconds feels to a performer!

The middle section of 28 bars is effectively a time-lapse of the entire moon cycle with its climax in the afore mentioned interval trills, which due to the high register for both flutes create a bright, shimmering effect. The intonation is truly gliding, as some notes in the two parts sometimes only differ by a quarter-tone. The flutes finally meet on the central note d5 in the last bar of this section.

The third part of Mond(schatten) immerses the listener in the gradual increase of the dark side of the moon. The less light the earth’s satellite has, the longer the rests become. Is it because of the efforts of the preceding music that the rests now feel like a welcome breather for the performers and are easier to count?

The listeners were impressed by the almost nine-minute-long premiere of Mond(schatten) which is all the more notable, since the piece was played during a “classical” concert.

For musicians it is definitely worth while to learn this work, the top part being the more difficult. The bass flute part has its challenges in the interval trills and harmonic notes in the high register. Otherwise, the piece is suitable for players who don’t have that much experience of the bass flute and would like to learn some of the possibilities of this magnificent instrument in a fascinating work.

The scores to all the mentioned pieces are available via the contact form at www.sophiepope.com Link to original publication : http://sophiepope.com/images/mondschatten-book.pdf